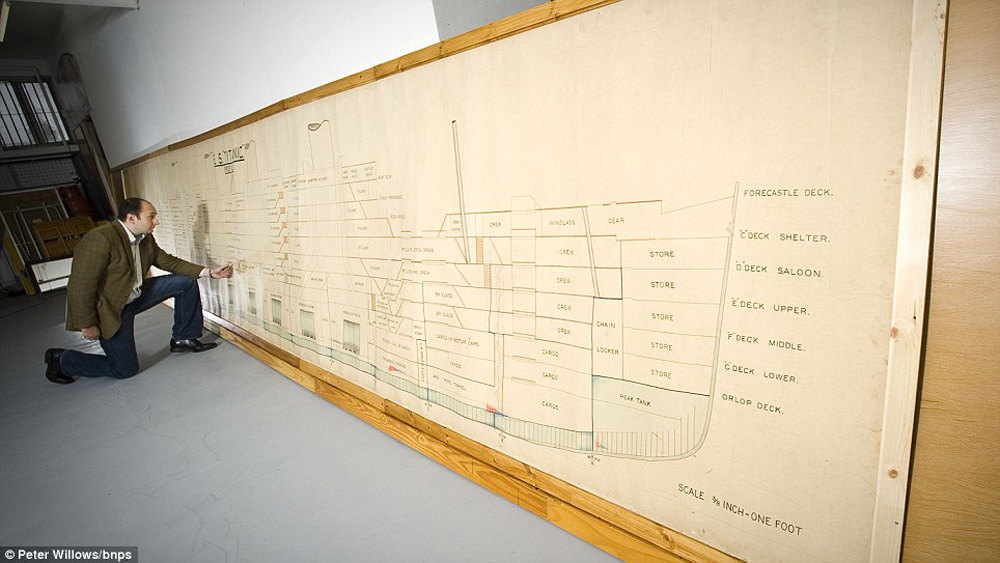 A man examines the profile of the Titanic which was intended to simplify the ship so witnesses could refer to it as they gave evidence (Press Release – London) – A large-scale plan of the Titanic, prepared for the official inquiry into the ship’s sinking, is being offered at an auction in Britain. Henry Aldridge & Son auctioneers estimates that the 32.5-foot-long (9.9-meter) cross-section of the ship could fetch between 100,000 and 150,00 pounds ($160,000 and $240,000) at the sale in Devizes in southern England on May 28. The plan is being sold by an anonymous collector, the auctioneer said Thursday. The ship sank on April 15, 1912, after striking an iceberg on its maiden voyage. The official inquiry opened on May 2, 1912, and nearly 100 witnesses testified during 36 days of hearings. The inquiry concluded: The loss of the said ship was due to collision with an iceberg brought about by the excessive speed at which the vessel was being navigated. Also offered for sale is a set of keys from one of Titanic first-class lavatories, estimated to sell between 40,000 pounds to 50,000 pounds ($65,000 and $80,000). A plan of the ship made by draftsmen at the Harland and Wolff shipyard in Belfast, Northern Ireland, where Titanic was built, is estimated between 30,000 pounds and 50,000 pounds ($48,00 and $80,000).