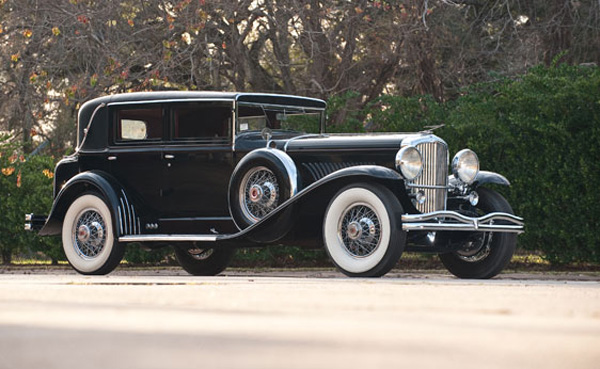 1932 Duesenberg Model J Five Passenger Sedan This past weekend, Auctions America continued its mission to rebuild the Auburn Auction Park over the weekend, hosting a successful debut Spring sale in Auburn, Indiana, May 12-15. Attracting collectors and enthusiasts from across the continent and as far away as Argentina, Belgium and Austria, the three-day Auburn Spring Collector Car Auction presented 424 automobiles and a select range of memorabilia, generating over $6.75 million in sales with 66% of all lots sold. Two majestic Model J Duesenbergs were the toast of the auction; the top-seller was a 1932 Duesenberg Model J Five-Passenger Sedan, which fetched $404,250, while a 1932 Duesenberg Model J Dual-Cowl Phaeton achieved $375,000. Also offered on Saturday was Baseball Hall of Famer Reggie Jackson’s 1965 Shelby Mustang GT 350, which attracted lively bidding and exceeded its pre-sale estimate to sell for $247,500. In addition to the auction, the weekend’s program included a car corral and swap meet with over 450 spaces sold. Presented by Carlisle Events, the car corral saw many vehicles exchange hands over the course of the weekend, while the swap meet proved a treasure chest for enthusiasts, featuring a wide selection of performance parts, porcelain and neon signs, gas pumps, memorabilia and more. Overall, it was another exciting weekend for the Auctions America crew, who have worked hard to restore the Auburn Auction Park to its previous glory. Full sale results are available online.