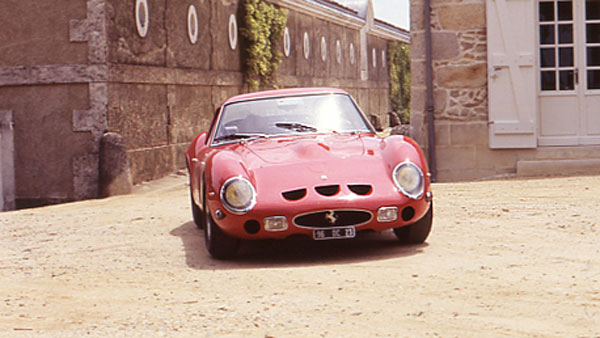 From 1962 till 1964, only 39 of these cars came out of the Ferrari factory, and have since then commanded record prices amongst vintage car collators, despite the recent years of economic downturn. Fitted with a 3.0-litre V12 engine producing 300 bhp and capable of 0-60 mph in 6.1 seconds, the 250 GTO is quick, even by today’s standards, and its top speed of 174 mph is only just short of what modern Ferraris are capable of. It debuted at the 1963 Tour de France road race, finishing second with Carlo Maria Abate and Lucien Bianchi behind the wheel. It also won the Rallye de Picardie, Rallye du Limousin and Les Andelys hillclimb in 1964 alone, and was subsequently owned by Lee Kun-hee, the chairman of Korean electronics giant Samsung, from 1996 to 2007. Other proud 250 GTO Brit owner include Chris Evans, Nick Mason and Pink Floyd drummer Mason, who has his car since 1975. Evans bought his GTO, a super-rare series two, one of just seven produced, at auction in 2010 for a comparatively cheap £12 million and has since had the car completely restored over many months. Classic Ferrari dealer John Collins, who once owned the 1963 car, said it had gone to a buyer across the pond. If I’d have thought it would go for that price then no way I would have sold it – I would have hung on to it, said Mr Collins, who sold the car for £2.2 million ($3.5 million) in 1996. Mr Collins hinted that the lucky buyer was actually located in South America, despite reports the car had gone to Spain. At £20.2 million, this 250 GTO Ferrari is believed to be the second most expensive car ever sold. First place belongs to a Bugatti Type 57SC, which sold for between $30-40 million in 2010. Only four examples of the Bugatti were produced and one is owned by Ralph Lauren. [IBT]