(Crewe, 1 March 2012) Bentley’s advanced multimedia Mulsanne Executive Interior Concept, first showcased at the 2011 Frankfurt Show, is now moving from the design studio to the commissioning suite with the introduction of Theatre and iPad Specifications offering state‑of‑the‑art multimedia connectivity on the move. 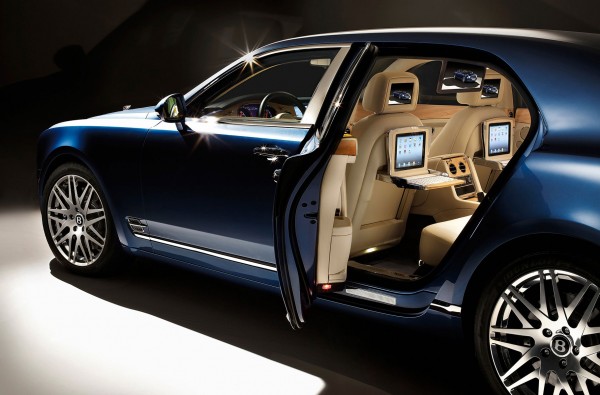 The original Mulsanne multimedia concept was previewed at several special customer events across the globe and the reaction was immensely encouraging. Bentley has now created two bespoke Specifications, Theatre and iPad, and we’re confident they will meet the expectations of customers needing a business-focussed environment or simply a relaxing space where films, music, television and the internet can be enjoyed, comments Alasdair Stewart, Bentley’s Member of the Board for Sales and Marketing. Both the Theatre and iPad Specifications are seamlessly integrated into the Mulsanne’s sumptuous and supremely comfortable cabin, which takes Bentley’s craftsmen and women over 170 hours to create. When not required, features like the drop-down screen or picnic tables retract and are stowed both quickly and discretely. 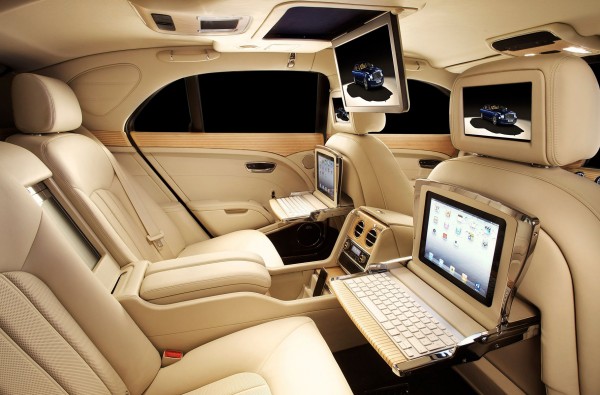 Theatre Specification for home entertainment and comfort on the move

With the Mulsanne Theatre Specification passengers in the rear cabin can enjoy a wide range of entertainment – choosing between DVD movies, television programmes, or music – which is offered via a 15.6-inch centrally located HD LED screen. As an alternative, each headrest is equipped with its own 8-inch screen, enabling passengers to select their own entertainment and listening in private through high quality Bluetooth headphones. Business users can take full advantage of the powerful processing capability and connectivity of the boot-mounted Apple Mac computer which is selectable for display via the HD LED screen. Twin USB ports positioned in the centre console provide easy access to the Mac to upload films, music and data or documents for use either in the cabin or once the journey ends. Finger-tip control is provided via an iPod touch allowing navigation of the technology by means of a unique Bentley ‘App’ and bespoke reading lights have been designed to provide optimum illumination for viewing documents. The opportunity to unwind in style is also catered forwith an exquisitely detailed, Bentley‑designed, luxury bottle cooler with space for two full-size Champagne bottles in a canted position, allowing opened bottles to be put back in the cooler. With one touch of a button, the frosted glass door quietly slides open to reveal three hand‑blown and hand-cut lead crystal champagne flutes, displayed beautifully by the white LED accent lighting. The flutes are exclusively created for Bentley by renowned British designer, David Redman of London, and echo the racing spoke design of the Mulsanne’s 21” 5-spoke Sports alloy wheel. The flutes can be placed in the bespoke-design bright chrome holders that deploy from the centre seat cushion. These also adapt to work as normal cup holders when required. The bottle cooler and fluteholders are discreetly concealed when not in use and the elegant design of the cooling system means that no boot space is compromised. 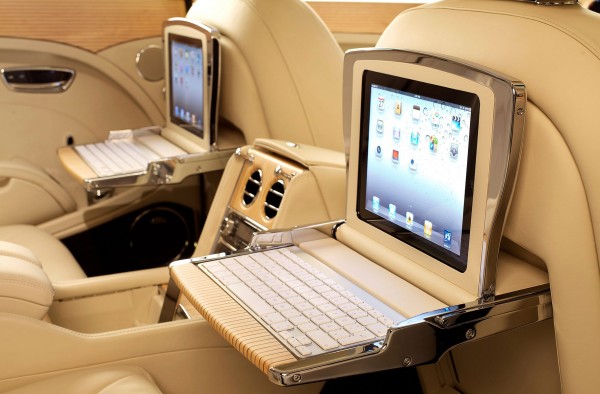 Two beautifully crafted, electrically-deployed veneered picnic tables for rear passengers provide a soft hide writing surface, colour-matched to the seats of the Mulsanne, and at the press of a button twin iPads with wireless keyboards are revealed. Both rear passengers can work on documents or files independently, email, browse the internet, make video calls or play music or games. The picnic tables are cleverly designed so that the keyboards can be easily removed and placed on the user’s lap for added comfort.

Both the Theatre and iPad Specifications of Mulsanne Executive Interior can be specified with a range of finishing touches including a Tibaldi fountain pen from its specially commissioned Collection which will be hand veneered to match the car and is discretely stowed in a dedicated dock in the centre armrest. And seen on a Bentley for the first time, a distinctive Yachting-style veneer of either Dark Wenge with a Maple Pinstripe or Maple using the Dark Wenge as the pinstripe motif. Both of these Yachting veneers are available in a Satin or Gloss Lacquer finish. Reflecting the technical character of the Executive Interior Mulsanne the car can be specified with unique 21” multi-spoke wheels, each cut from a solid, forged aluminium billet by computer-controlled lathes and milling machines. Each billet initially weighs 85 kg, and, like a sculpture emerging from a block of marble, is transformed in around three hours into a light-weight wheel weighing 13.4 kg. The wheels are then individually immersed in small ceramic pebbles and agitated for many hours to produce the mirror-polish finish. 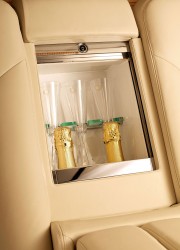 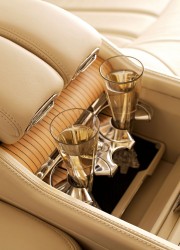 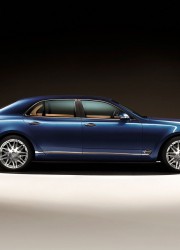 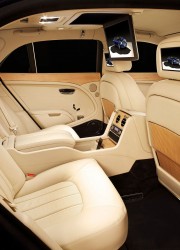 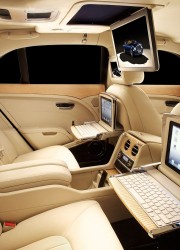 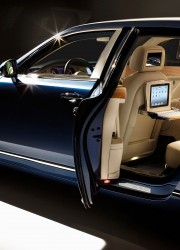 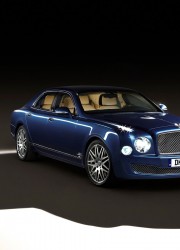 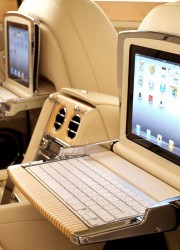 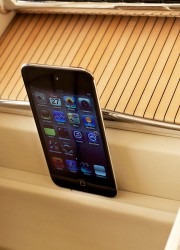 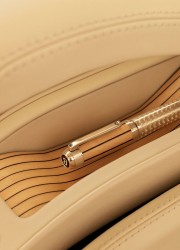