Among the many rare notes crossing the block next month at the Dallas National Money Show, the Series 1905 $20 Gold Certificate stands out as one of the most interesting. Earning the #9 spot in 100 Greatest American Currency Notes, the “Technicolor Note” bears one of the most attractive color schemes of any U.S. note, with beautiful yellow overprint on the face and deep gold color on the reverse. 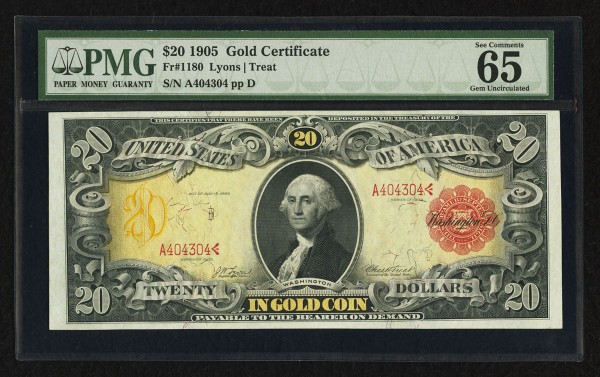 This type of note bears two signature combinations, designated by Friedberg numbers 1179 (Lyons-Roberts) and 1180 (Lyons-Treat), of which our current example is an 1180. The vignette of Washington is a classic engraving by Alfred Sealy, based on the Stuart Portrait of Washington. This 1867 engraving also appeared on the reverse of the $1 Educational Series and a number of other notes. The back design features the Great Seal of the United States. Though production totals were well over three million notes, between 500 and 750 of these notes are estimated to survive, and they are quite scarce in uncirculated condition. The majority of the high-grade notes have been traced to a single group that came to William Philpott from a friend at the Treasury Department. All of the twenty-five notes in the group had serial numbers beginning with A4043-. Heritage has handled over a dozen of the examples from Philpott’s original group, and this is yet another excellent example. Philpott’s position as head of the Texas Banker’s Association allowed him to develop Treasury contacts and gave him excellent access to material. A Dallas resident, he was a friend of Harry Bass Jr., a fellow Dallas collector of both U.S. coins and currency, and of Fort Worth dealer B. Max Mehl. Philpott’s currency exhibit at the 1953 ANA convention in Dallas won Best in Show, and he contributed an article to The Numismatist on signature combinations on U.S. notes in 1959. 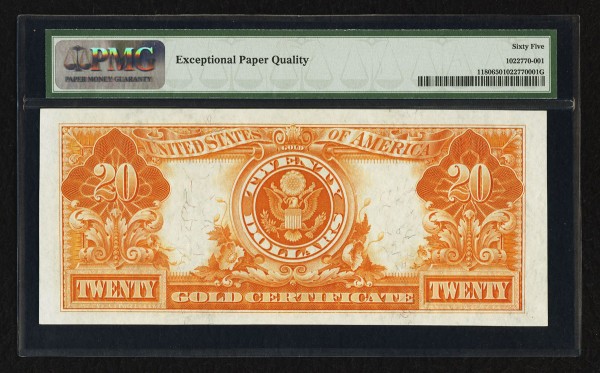