Carroll Shelby is a name synonymous with performance. In 1964 Shelby began working with Ford to develop a performance version of their highly successful Mustang to compete in SCCA road racing. The result was the creation of the 1965 Shelby GT 350. In 1967 Shelby went through the first redesign of their Shelby line of Mustangs, during which time they added the GT 500 to their lineup. The GT 500 gave car buyers a new option featuring a larger 428-cid engine. Like the first iteration of the Shelby, the new GT 500 offered buyers increased performance which was evident in the 6.5 second 0- to 60-mph time.

The 1968 GT 500 also offered added comfort to customers which included a console with a padded arm rest and Stewart-Warner oil pressure and amp gauges mounted below the radio. Additionally, the interior featured an integrated rollcage. This 1968 Shelby GT 500 is powered by a 428-cid, 360-hp V-8 engine mated to a C6 three-speed automatic transmission. The car was professionally restored in 2003, to its current black-on-black exterior and interior appearance. The car features an impressive list of factory options including 10-spoke aluminum wheels, Lucas foglights, tilt-away column, wood steering wheel, AM/FM radio, shoulder harness and a fold-down rear seat. 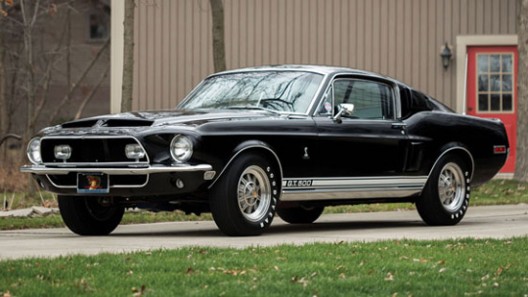 Driver aides on the car include power steering and brakes. In the trunk the car retains the correct space-saver spare tire with jack, hold down and inflator bottle. The car comes with a Marti Report, Certificate of Authenticity from Shelby, and a 1968 Shelby Cobra GT 350/500 owner’s manual. The car was built on December 12, 1967. According to the data tags the car’s paint code is I, which signifies the car was originally Lime Green Metallic. The interior code specifies 6A, which represents black décor bucket seats. 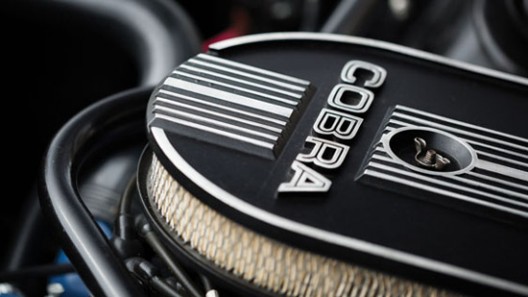 According to the Marti Report, when the car was ordered new it featured the following optional extras: cooling package, visibility group, wheel lip moldings, sport deck rear seat, power steering, power front disc brakes, tilt-away steering column, AM radio, interior decor group, tachometer and trip odometer. The car will be offered by Auctions America on Saturday, May 7, 2016 at its Auburn Spring sale. It is estimated $110,000 – $125,000. 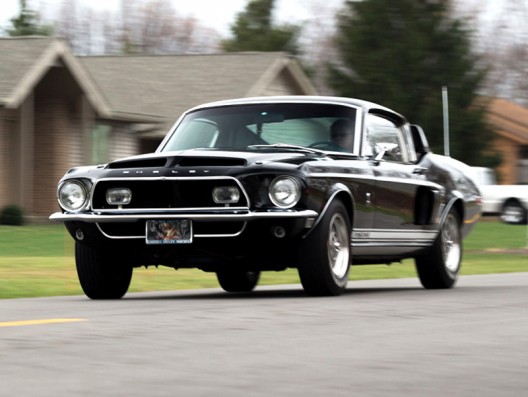