The reason why Corum Bubble 47 Flying Tourbillon timepiece is called the “bubble watch” is its great sapphire crystal, which has more importance than the aesthetic … Watches usually have flat sapphire crystal with anti-reflective coatings, but Corum model has quite the opposite, that great form in its design, which makes it unique. Due to the extreme nature of the curved sapphire crystal of this model, it has an alien look, which many fans of chorology many adore. 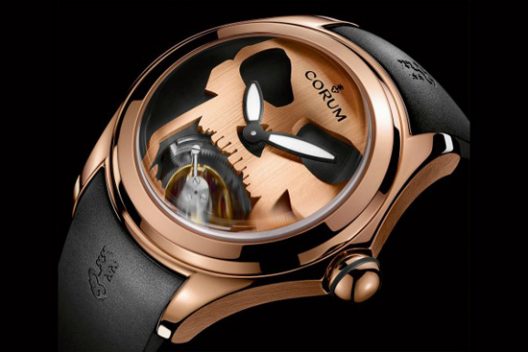 To this look of the watch contributes the watch case – 47 mm in diameter made of 18k white gold, which emphasizes its size. The case thickness is incredible 18,55, just because of the curved sapphire crystal. Clear to us that this is not a small, elegant minimalist watch – its purpose is to attract attention. Another thing that accentuates its interesting appearance is a big brass skull constituting its dial. Big, empty, hollowed eyes combined with details in black coal color, creating a Gothic look that can rarely be seen on luxury models. The mouth of the skull served as a frame for Tourbillon function located at six hours, which further emphasizes the mystical nature. 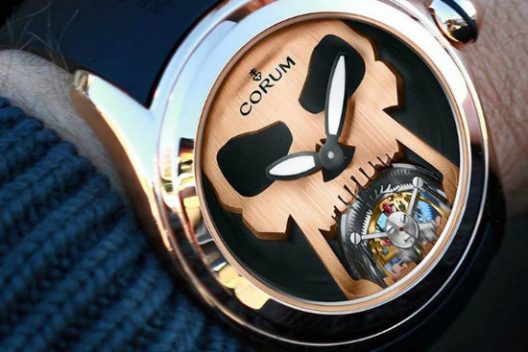 The watch is powered by CO 016 mechanism – an automatic mechanism that relies on micro-rotor winding. Micro rotor comprises Corum key of 18k red gold, while the energy reserve of this model is 72 hours, and the frequency of the mechanism is 3 Hz. With a price tag of $100,500, Corum Bubble 47 Flying Tourbillon acts as a very unusual watch. Although will attract abundance of attention, we know that its appearance will appreciate only those specific watch lovers who know how to respect individualism. 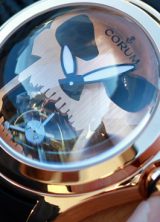 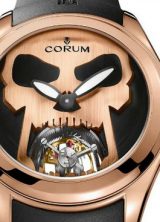 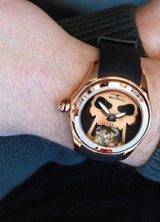