Benetti has announced the sale of a 63-meter (207-foot) custom yacht to a German owner. Since Benetti is not revealing the megayacht’s name, at least at this point, it refers to her by her hull number, FB276. As is the case with all of the custom megayachts from the Italian builder, FB276 features a steel hull and aluminum superstructure. The exterior of the FB276 is the result of a joint effort between Benetti and Giorgio M. Cassetta Design, while the interior is by Bannenberg & Rowell. 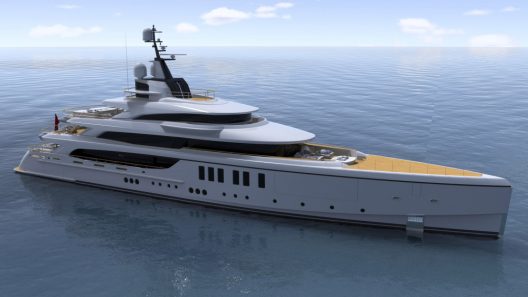 The defining feature of this yacht, located on the upper deck, is what can only be described as a spacious “apartment”. This offers the owner 162 m2 of privacy, including the owner’s cabin, which has large glazed surfaces on three sides, two bathrooms, a walk-in wardrobe and a separate living area with sofa and television. These are all connected with a bow cockpit combined with a 55 m2 bow terrace complete with touch and go helipad. The privacy of the area is ensured during navigation as well, with the help of the “sun roof”, which is specially designed to block the view from the wheelhouse. The central stairway leads directly to the bridge deck and the third cockpit, which has a dining table seating 12, a bar, a jacuzzi and a sun lounging area. On the main deck, in addition to the saloon with living and dining areas, is the big full-beam VIP cabin with side terrace, studio, dressing room and double bathroom. The design of this yacht also features many other distinctive and innovative elements. They include the stern beach club, which is open on three sides, offering exceptional contact with the sea, when both of the two side doors and the stern door are open. A stairway from the cockpit on the main deck provides access to this living area during navigation. The large cockpit on the main deck is joined by another one on the upper deck. 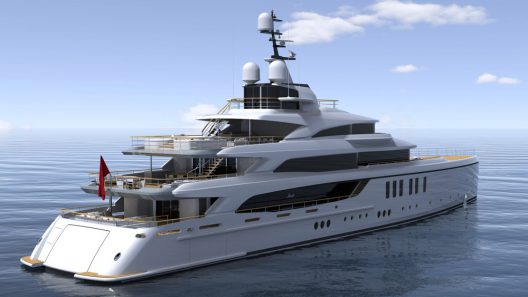 The spaces available in the FB276 have allowed Bannenberg & Rowell to experiment, in particular with asymmetrical layouts. The new approach is clear to see in the beach club, which is rotated about 30 degrees off-centre to open up new perspectives of the sea, as well as in the main and upper deck saloons, which are turned through the same angle to challenge conventional expectations and perceptions. Likewise, the all-around owner’s suitehas been designed to offer breath-taking panoramic views through the large windows over the private bow deck. Bannenberg & Rowell states the delivery date for FB276 is set for March 2019. 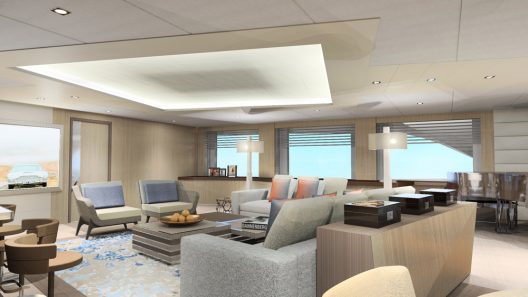