With its latest Great Characters Limited Edition Series, Montblanc honors one of the most famous bands of all time – The Beatles!  With the band members John Lennon, Paul McCartney, George Harrison and Ringo Starr, the Beatles became the most important and influential act of the rock era.  In the early 60s of the last century, their popularity was already called “Beatlemania”. As the music of the group grew, led by songwriters Lennon and McCartney, the band became the embodiment of the ideas of counterculture in the 1960s.

The Beatles Special Edition Rollerball is inspired by the rock music style and the famous album “Sgt Pepper’s Lonely Hearts Club” by the Beatles: the multi-colored and colorful paint is inspired by the Beatles uniform on the cover of their famous album. The tip of the pen is inspired by a button of the mixing console in the famous Abbey Road Studios, while the cap itself is reminiscent of the microphone of the studio. The platinum-plated clip symbolically shows the iconic Beatle mustaches of their portrait. The black/white Montblanc emblem can be found on the top of the pen. In addition to this special edition pen, Montblanc also revealed The Beatles Limited Edition 1969 Rollerball Pen captures the magic of The Beatles era with symbols on the lacquered cap and barrel of the writing instrument associated with the iconic album “Abbey Road”.  Alongside the peace symbol on the cap and the silhouette of The Beatles crossing Abbey Road, the metal inlay on the cap refers to the “LMW 28 IF” license plate of the VW that was depicted on the album’s cover. 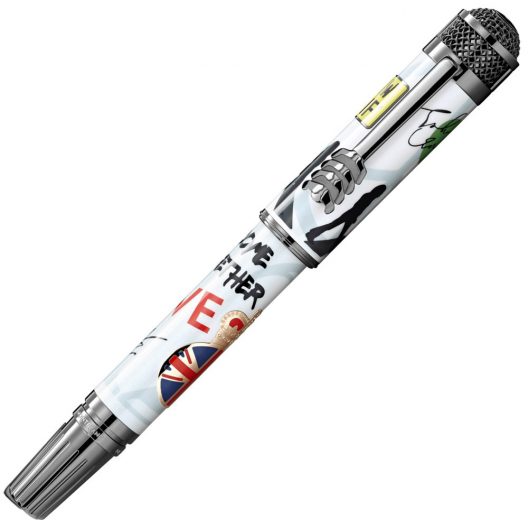 The Union Jack inlay on the barrel references the “Her Majesty” song featured on the record. The sophisticated inlay process requires the metal to be treated by etching, then bent to shape to the requested diameter then finally lacquered by hand with great precision. The moustache designed clip, the recording microphone cone and other fittings are ruthenium coated, creating a contrast with the white lacquer of the cap and barrel.  The Montblanc emblem in black and white resin crowns this tribute to the music legends. The famous Apple logo used on so many historic vinyls was the inspiration for  the pattern engraved on the handcrafted Au 750 solid gold, partly ruthenium-coated nib. The pens come in a special Beatles gift box. 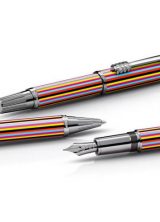 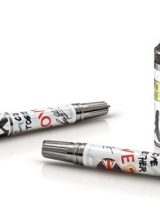 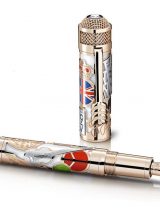