Parmigiani Fleurier embodied Bugatti Chiron hypercar in a revolutionary watch. It is an homage to a spectacular partnership and the many common values that unite Parmigiani Fleurier and Bugatti. nspired by the fluid curves of the Bugatti Chiron, the case is created from gold, (white gold or rose gold, depending on the version). It was created by Les Artisans Boîtiers – one of the Parmigiani Fleurier manufacture’s divisions; it stands out thanks to its ability to pivot 12° around its drive shaft to ensure it sits ergonomically on any wrist. 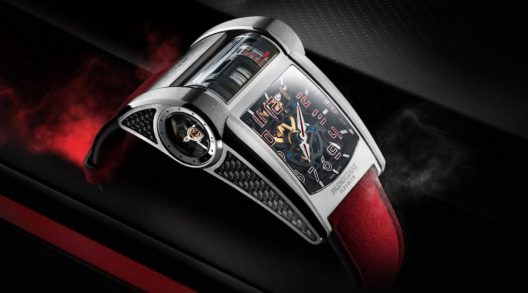 The remarkable technical sophistication of the timepiece can be admired via the large openings topped with concave sapphire crystals, immersing the viewer in the heart of this complex creation. As expected from Parmigiani Fleurier, the Type 390 also displays superb craftsmanship. All movement parts are meticulously finished. The case’s polished / satin-brushed surfaces are impeccable. It is engraved with the Parmigiani logo as well as the EB initials of Ettore Bugatti. The dial is finely openworked, featuring Arabic numerals and is paired with luminescent hands. The smooth alligator strap is crafted by Hermes and fitted with a gold folding buckle. The PF390 movement is formed of seven layers featuring a total of 302 components and is probably the most complex watch movement manufactured by Parmigiani Fleurier to date. 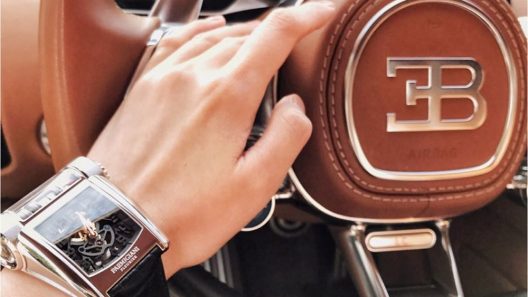 This tubular calibre is housed in a cylinder boasting an 80-hour power reserve thanks to its two series-mounted barrels. Its diameter is the same as that of the tourbillon that emerges from the end of the cylinder. The transmission of information from the tubular structure to the dial positioned perpendicular to it is made possible thanks to a worm screw. Moreover, the modular construction of this movement means that it can be removed from its housing just as an engine would be removed from a supercar for important modifications. Priced at CHF 295’000, it is released in two limited editions of 10 pieces. 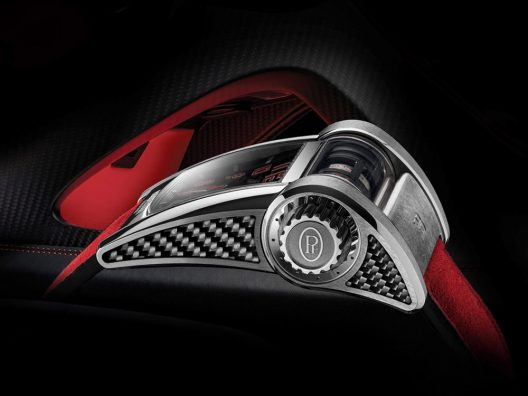