Mercedes-Benz at the recent Frankfurt Motor Show with little fanfare announced to enter the business of electric scooters.
With urbanization on the rise, most routes that people cross on a daily basis fall into the category of “micromobility” and are therefore prime candidates for the use of bicycles, scooters and electric scooters. For example, in the United States, approximately 60% of all routes are eight miles or less.
The parent company Daimler announced that the first electric scooters would launch in early 2020. 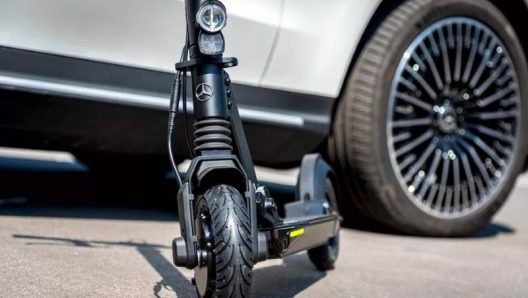 The carmaker did not provide details on autonomy, price or any other information. What is known is that the company has partnered with Swiss company Micro on this project, which specializes in electric vehicles, and is known to us for its cute little Microlino car.
The electric scooter will be co-branded, with the Micro logo and Mercedes-Benz star. More specifically, the German company counts the electric scooter as part of the EQ family. The EQ mark represents the brand’s electric cars – the first of which was the EQC electric crossover. The EQ range will eventually include the EQA small car, the EQV production van and the EQS sedan concept that Mercedes-Benz has already demonstrated at the Frankfurt Motor Show.
As congestion grows in the metropolitan areas and road extensions decline, people will look for an option to deal with the situation. Car manufacturers are keeping a close eye on trends and mobility of all kinds. Judging by the growing trend in the micromobility sector, it is certain that electric scooter will only experience their expansion.