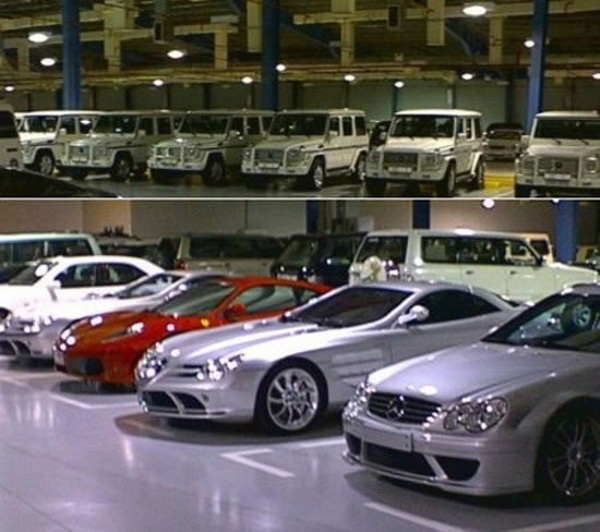 Sultan of Brunei’s Garage Hassanal Bolkiah, the Sultan of Brunei’s name regularly appears when the phrase the world’s most is used. Whether it relates to his overall wealth, his palaces, or his investments, the Sultan never comes up short. As is the case with his car collection. He is the proud owner of the world’s most unique car collection. Total price of the collection containing 7,000 high performance cars is $5,000,000,000. Where do you keep 7000 of the world’s rarest cars? Well, he doesn’t have a 7000 door garage, instead he stores most of them in five ultra-secret aircraft hangars,where specialist teams from the various manufacturers maintain it. What exactly is hiding behind the garage-doors in the Sultan’s palace, nobody knows for sure. According to the Daily Mirror, as of June 30th 2010, the wealthy sultan is a proud owner of 604 Rolls Royces, 574 Mercedes-Benzes, 452 Ferraris, 382 Bentleys, 209 BMWs, 179 Jaguars, 134 Koenigseggs, 21 Lamborghinis, 11 Aston Martins, and 1 SSC, among others. To put this whole thing into perspective, 10 of those 11 Aston Martins are the super-rare One-77. In case the obvious isn’t obvious enough, there were only 77 of those supercars made. Wait, it gets better: Koenigsegg puts out a limited 20 cars a year and Sultan of Brunei has 134 of them. If that’s not enough to tickle your fancy he also has an array of super-rare one-off cars that really makes his collection stand apart. These one-offs include two, rare, operational, Ferrari Mythos concepts, a modified Jaguar XJ220 designed by Pininfarina himself, a Bentley Java, and a Bentley Dominator 4×4. He is also the owner of the only Cicero BDB Maestro ever built. Other cars include the only right hand drive Mercedes CLK GTR, built just for him, the only Porsche Carma, and the only Koenigsegg Agera CC GT. Around 3000 vehicles reside in the complex, all logged onto a central computer system based in the workshop administration center on the site. If not driven by immediate members of the family, then they are used by the ministers of state, government officials and members of the royal household. Sultan of Brunei’s Garage
If you like you can check latest Other Stuff photos