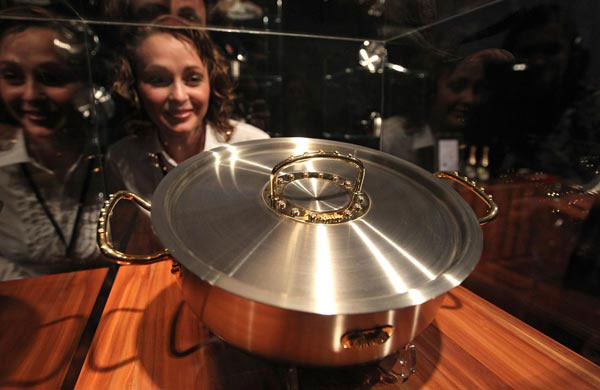 Diamond-studded Saucepan on Display at Millionaire Fair in Moscow\ A Diamond-studded Saucepan was attracting plenty of interest at Millionaire Fair, Moscow’s top annual luxury fair, offering the usual array of sparkly bling, fast cars and vast price tags. Displayed in a glass case, the saucepan has a handle and lid encrusted with 270 diamonds set in the 18-carat gold on the handle and lid. Made by German cookware brand Fissler, the saucepan is not really suitable for cooking, brand manager Natalya Oreshkina said, shuddering at the idea of putting it in an oven. It is for serving food beautifully, she explained as crowds packed the Manezh exhibition centre in central Moscow. At €150,000 (about $210,800), the pan costs roughly the same as a Porsche Cayenne SUV, but is better value, Oreshkina claimed in a practised sales pitch. A Porsche Cayenne turns into a pile of metal once it leaves the showroom. This is an investment. The Millionare Faire has been held since 2005 in celebration of excess, luxury and capitalist consumption. This year’s Fair has been even more lavish with previous years in celebration of Russia’s slow but recent rebound after the economy took a serious nosedive during the global financial crisis. There were plenty of sports cars, including Ferraris and an orange Lamborghini selling for a whopping $729,000. There was also a $150,000 glass piano and a German skincare line that came packaged in $4,000 containers decorated with 5,000 Swarovski crystals. There were also flash-drive jewelry and diamond-decorated hands-free phone sets. Models were also seen strutting in expensive lingerie lines. But some of the most expensive items were mosaics made of thousands of Swarovski crystals made by Australian artist Sharon Jones. One piece illustrating a child’s eye went for $3 million. The Moscow Millionaire Fair will run until Sunday night, October 24th. The organizers are based in the Netherlands where the first Millionaire fair was held. 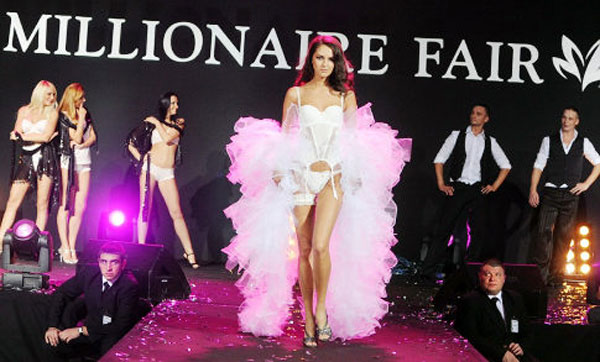 Expensive Lingerie Lines on Display at Millionaire Fair in Moscow 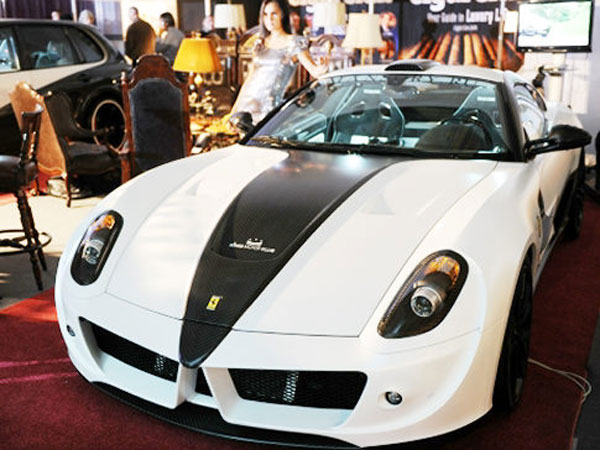 Ferrari on Display at Millionaire Fair in Moscow 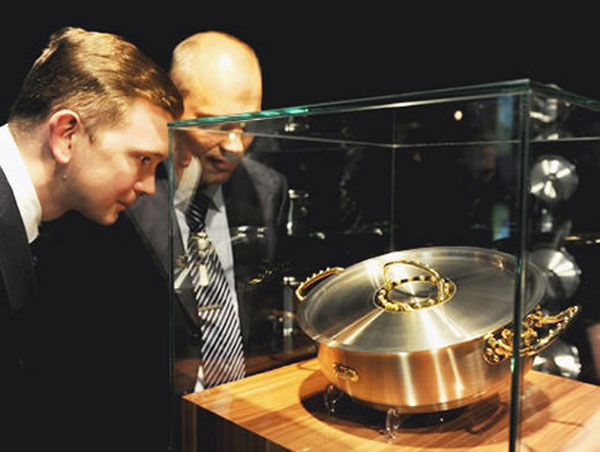