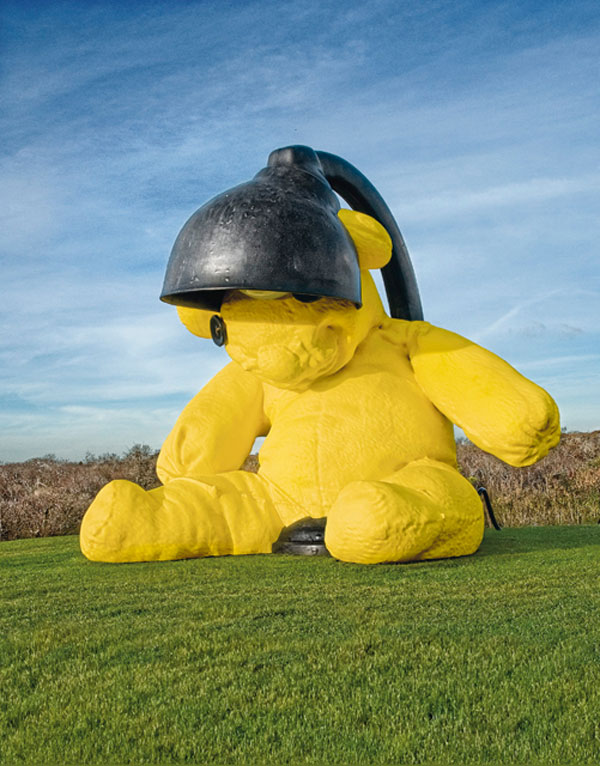 Giant Yellow Teddy Bear by Urs Fischer Great sculptural masterpiece, a Giant Yellow Teddy Bear which will adorn and brighten New York City, could be sell for more than $9 million at auction in May. A 23-foot high, bronze teddy bear slumped under a black bedside lamp will be on display for five months in midtown Manhattan from next week and be a highlight of the Post-War & Contemporary sale on May 11. The 35,000 pound Untitled (Lamp/Bear) bear with button eyes has been crafted by New York-based Swiss artist Urs Fischer. The sculpture had been inspired by Fischer’s own much-loved teddy bear. Fischer sewed together a one-foot tall teddy bear and scanned it with a 3-D laser to generate drawings to create the sculpture. The yellow teddy bear is currently being assembled in the plaza of the architecturally acclaimed Seagram Building skyscraper on Park Avenue. An added feature of the sculpture is that the table lamp above the bear’s head works, so the bear can be lit up at night. Brett Gorvy, Christie’s deputy chairman for Post-War and Contemporary Art, described Fischer as the Jeff Koons of his generation. We have seen contemporary sculpture works by Jeff Koons selling at $25 million and Urs Fischer is the leading pretender to the throne, he said. He is considered the most important, the most provocative of contemporary artists today. Gorvy said the U.S. collector selling the sculpture, whom he declined to name, had already turned down a private offer of $9 million. The anticipation is that it will make more than that, he said. There’s a very good chance it’s going to go to a museum or a private institution. [Christie’s]
If you like you can check latest Other Stuff photos