The rich history of the American West explored through valuable artifacts from its biggest names, June 10, at Heritage Auctions in Dallas

Heritage Auctions’ June 10 Legends of the Wild West Signature Auction is shaping up as the most important auction of its kind ever put together, featuring more than 300 artifacts from the biggest and most important names in the history of the American West. The grouping includes The very 12 Gauge Parker Brothers Shotgun, Serial #48767, that belonged to legendary sharpshooter Annie Oakley, consigned by her relatives (estimate: $100,000+), “Buffalo” Bill Cody’s beloved and trusted Remington .44 revolver (estimate: $200,000+), Custer’s Last Rally, 1881, John Mulvany ‘s epic 11 x 20 foot oil painting (estimate: $200,000+), a cultural phenomenon in its time – the only known document in private hands signed by both legendary American explorers Meriwether Lewis and William Clark, the men who opened up the West for America after the historic Louisiana Purchase of 1803. There is immense collector buzz on this auction as we get closer to its date, said Tom Slater, Director of Americana Auctions at Heritage. There has never been a more important, more thorough or more personal grouping of artifacts relating to these legendary names than what we will see at Heritage on June 10.

Legends of the Wild West Signature Auction include, but are not limited to:

The Annie Oakley shotgun, carefully preserved by her family for some 125 years, has been consigned by Southern California sisters Terrye Holcomb and Tommye Tait, daughters of Billie Butler – herself the great-niece of Oakley’s husband and partner, Frank Butler. Billie was taught how to shoot by the legendary sharpshooter and treated by Oakley as the grandchild she never had. Butler in turn taught her daughters to shoot on this very famous gun. We had decades worth of treasures in steamer trunks, Terrye Holcomb said. My mother cherished her family, and when the family passed, this is what she clung to. This Parker shotgun was delivered in 1885, known to be the year Oakley began using the renowned brand, said Slater. Though we can never know for sure, it quite probably was her first Parker arena gun. It clearly saw plenty of use, for on Aug. 23, 1886, near the end of her second full season with Buffalo Bill’s Wild West, her husband returned it for her to Parker Brothers to be reconditioned.

It’s not known when Buffalo Bill Cody acquired the Civil War-issue Remington New Model Army .44 percussion revolver in the auction, but he carried it and counted on it as a plainsman guiding America’s frontier army during the Indian Wars; he was one of the busiest and most respected of all the civilian scouts and guides for the U.S. Army. One of his commanders, Gen. Eugene Carr of the 5th Cavalry, wrote of Cody that “his eyes were better than a good field glass,” that his marksmanship was exceptional and that he was always in the right place at the right time. This is the most important William F. ‘Buffalo Bill’ Cody gun in existence, said Slater. To say that it ‘never failed’ him is the most eloquent tribute a craftsman can pay to his favorite tool, and few craftsmen ever depended a tool the way Buffalo Bill depended on this gun. Cody was notoriously unsentimental about his possessions, saving very few relics from his days on the plains. He did save two of them, however: His rifle, which can be viewed at the Buffalo Bill Historical Center in Cody, Wyoming, and this very gun. For Christmas 1906 he gave it to his longtime best and most trusted friend Charles Trego and Charlie’s wife, Carrie – an extraordinary token of affection and high esteem indeed – for which he wrote an accompanying note on his business card, which is included with this gun and the extraordinary archive documenting it: To Charlie & Carrie Trego. This old Remington revolver. I carried and used for many years in Indian Wars and Buffalo killing. And it never failed me. WF Cody Dec 13th 1906. Considering how the names Lewis and Clark are linked in the popular mind, it’s nothing short of amazing that the document in the auction signed by both men should be the only surviving paper bearing both their signatures that exists in private hands, but that is indeed the case. Careful research confirms the Library of Congress doesn’t have anything, though there are possibly one or two land grants signed by both held in other institutional collections, said Slater. It’s almost impossible to overstate the significance of this offering. Here’s a case where immense historical significance, profound human interest and extreme rarity come together to form a truly museum-quality treasure. The death of Lewis fell so near to the signing of this document that Carr, an original witness to the signing, was called upon a second time to attest to the document’s legality. The document was notarized on the verso on Jan. 5, 1810, attesting to the veracity of the indenture.

Custer’s Last Rally, 1881, by John Mulvany ‘s is a truly epic 11 x 20 foot oil painting. A truly blockbuster achievement in its time, it took two years to complete and immediately achieved wide recognition. The first major exhibition of the work occurred in New York City, where it created a sensation. John Mulvany had his proverbial 15 minutes of fame when he unveiled his masterwork, Custer’s Last Rally, in March of 1881, said Slater. His trajectory might well be compared with that of another one-hit wonder, Archibald MacNeil Willard, who created one of the most iconic American paintings, Spirit of ’76, for the 1876 Centennial Celebration. Neither artist would again approach the impact achieved by his signature work. Sitting Bull’s original 1885 contract for him to appear in Buffalo Bill’s Wild West, signed by Sitting Bull (c. 1831-1890), at $25 a month: Estimate: $50,000+. Oil portrait of Sitting Bull, painted from life by H. H. Cross in 1882 and actually signed by the Great Chief: Estimate: $20,000+. George Armstrong Custer – His Personal Cavalry Saddle from the Indian Wars Period, with Terrific Provenance: It was obtained by legendary collector Lawrence Frost from the Custer family in 1941. It’s hard to imagine a more meaningful relic of Custer than his personal Indian Wars-era cavalry saddle. Here is something with an important and personal connection to this legendary Western figure, the saddle on which he undoubtedly sat while he did what he loved best, and for which he is best remembered. Opening bid: $10,000.

Colt Revolver Found at the Little Bighorn Battle Site in 1935: A Most evocative relic, this 1860 model Colt Army revolver, made in late 1867, was undoubtedly brought into the battle by an Indian combatant, as Custer’s men were using a newer model. It was found along the banks of the Little Bighorn at the site of the battle, buried in the ground with only the butt visible. The river was unusually high at the time of the battle, and it seems probable that the weapon was dropped into the water and lost. But at the time it was recovered, the river was lower, allowing it to be detected. What is particularly interesting about this gun is the fact it is still loaded (albeit with corroded and non-functional bullets). Opening bid: $5,000. Fine Plains Indians Saddle, with Accompanying Research Attributing It to the Cheyenne War Chief Two Moons, a Major Figure at Little Bighorn, and One of Fraser’s Three Models for the Buffalo Nickel: Two Moons (1842-1917) was present at virtually every significant skirmish or battle between the Cheyenne and U.S. Army forces, and was one of the significant war chiefs of the Cheyenne at Little Bighorn. Although accounts are conflicting, some name him as the man who took Custer’s life. Other accounts include him among the prominent Cheyenne who prevented the ritual mutilation of Custer’s body after the battle. Opening bid: $5,000. One of a kind Annie Oakley Stetson hat in her Familiar Style: This handsome Stetson with its ribbon trim was purchased as a gift for Annie Oakley by brother-in-law William Butler in Douglas, Wyoming. After her Great-Aunt Annie’s death, Billie Butler posed for photographs holding one of Annie Oakley’s rifles and wearing this hat. The real significance of this hat for collectors is its rarity; very few Oakley garments are known to survive (mostly in the Annie Oakley Center, Garst Museum, Greenville, Ohio) and no other western hat. This is one of a kind. Opening bid: $2,000. 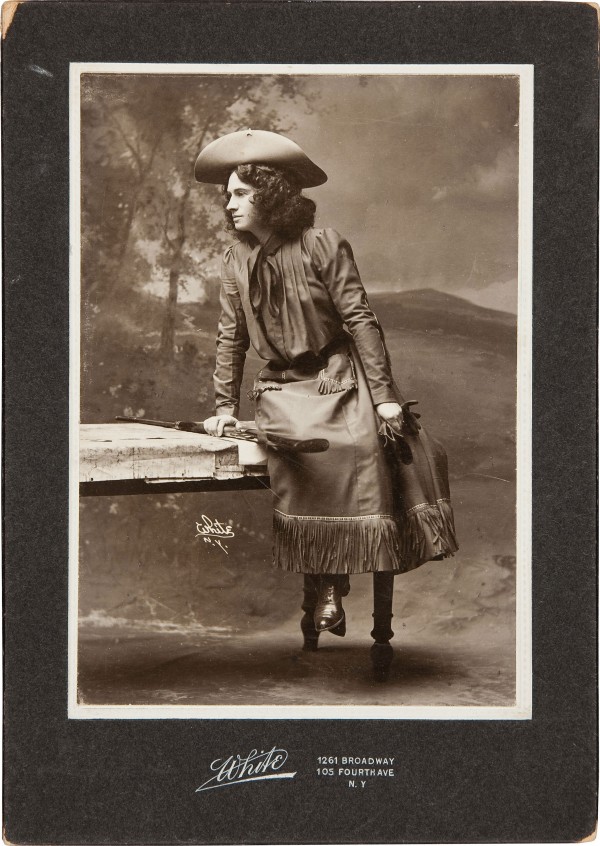 Previously unknown and unpublished Annie Oakley as The Western Girl, a Rare Cabinet Photo Signed and Inscribed on Verso: One of a series of exceptional photographs taken in 1902 or 1903 in New York, this picture of a lovely and relaxed Annie Oakley has never been published and is previously unknown. The gold-plated and engraved presentation M1894 Winchester in her hand is part of the collections of the Buffalo Bill Historical Center. The famous star affixed to her hat has never been found. The back of this photograph is signed and identified by Annie: “Annie Oakley as Nance Barry in The Western Girl.” Opening bid: $2,000. Annie Oakley & Frank Butler, A Rare Pair of Early Cabinet Photos, with Names in Butler’s Hand on Verso: Very early cabinet photographs of Annie Oakley and Frank Butler from negatives originally made in Chicago in about 1882 as the pair were beginning to bill themselves as the shooting act “Butler and Oakley.” Annie is about 22 years old; Frank is 10 years older. These pictures are identified on the back in Frank’s hand. It may be the first, and it is certainly one of the earliest publicity pictures of Phoebe Ann Moses as “Annie Oakley.” Opening bid: $1,000. Annie Oakley and Frank Butler, a wonderful 1891 Christmas Card from the Famous Pair: Annie and Frank sent Christmas greetings to family and a wide circle of friends each year. Christmas 1891 was special, though. The Butlers were home from Europe for the first time in a year and Annie’s triumphs in Buffalo Bill’s Wild West and her public shooting exploits had made her one of the most famous women in America. So Frank and Annie created a special greeting, one that incorporated one of Frank’s verses along with illustrations that suggested Annie’s public persona as a western girl. Annie’s Christmas card is extremely rare; only one other is known for sure and is in a public collection. Opening bid: $750. [Heritage Auctions] 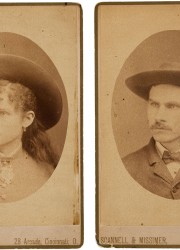 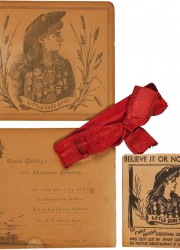 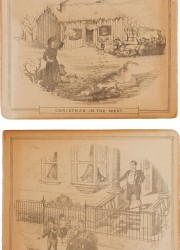 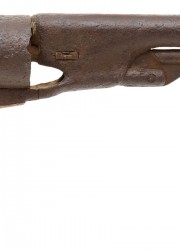 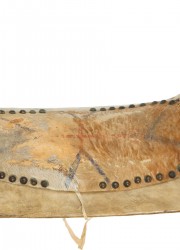 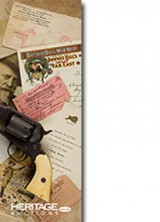 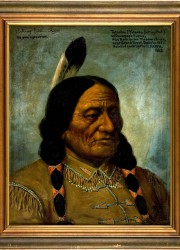 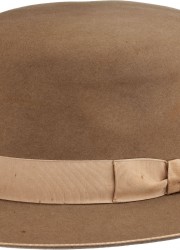 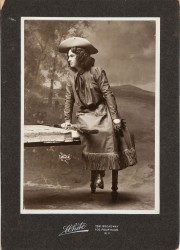 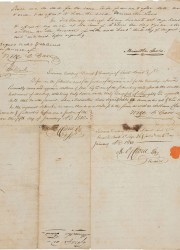 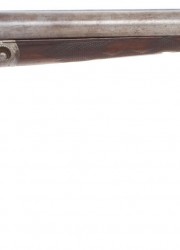