Costing $80,000 per night, the Royal Penthouse Suite at Hotel President Wilson in Geneva is the most expensive room in the world. This suite is famous for being the largest one in Europe (1’680 sqm in total) and the most luxurious Suite in the world. It has hosted a venerable guest list including Bill Gates and Michael Douglas. Apparently, some famous musicians have found inspiration in the panoramic view of Lake Geneva and the Swiss Alps. 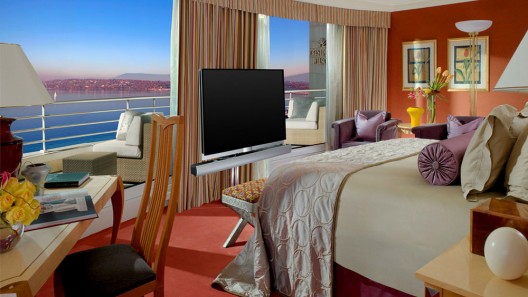 Located on the eighth and top floor of the hotel, the Royal Penthouse Suite offers to the most demanding guests 12 luxury bedrooms including marble bathrooms, as well as a private terrace with a unforgettable panoramic view over the lake and the Mont-Blanc. With every conceivable amenity, such as one of the 3 biggest Bang & Olufsen TV screen in the world (BeoVision 4-103 flat-screen) with sound system, a Steinway grand piano, a billiards table, a collection of ancient books and pieces of art, as well as a private gym, the suite leaves nothing to be desired. This truly unique suite stands for pure luxury with maximum security, from bulletproof windows and safe to a private lift to take guests directly to their majestic living quarters. The Hotel President Wilson was built in 1962 and named after Woodrow Wilson for his efforts in promoting the League of Nations – the precursor to the U.N. In 2000, the Hotel President Wilson became part of Starwood Hotels and Resorts and a member of the Luxury Collection. By autumn of 2007, the Hotel President Wilson underwent a 26-million Euro renovation headed by acclaimed Swiss architects Atelier d’Architecture 3 BM3. Completed in 2010, the lobby, public areas, and guest rooms now boast a sleek, modern design inspired by its panoramic location on the banks of Lake Geneva. 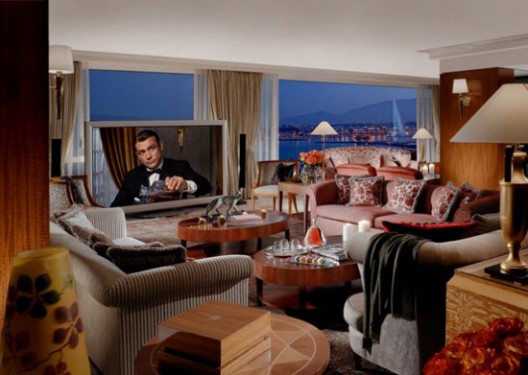