When talking about the use of ceramic in watchmaking, Omega has to be mentioned. Back in 2013, the Speedmaster Dark Side of the Moon was one of the biggest hits of Baselworld, and over the subsequent years Omega has added to the line-up with similar chronographs in different combinations of colored ceramics. The new Seamaster Planet Ocean “Big Blue” is the latest full ceramic watch from Omega. As its name suggest, it is a big watch – case measures 45.5mm across and 17.8mm thick, but because it is made out of ceramic, which is substantially lighter than stainless steel, it should feel light on the wrist. Water-resistance is a formidable 600 meters, and there’s a helium release valve. In other words, this is a serious professional dive watch. 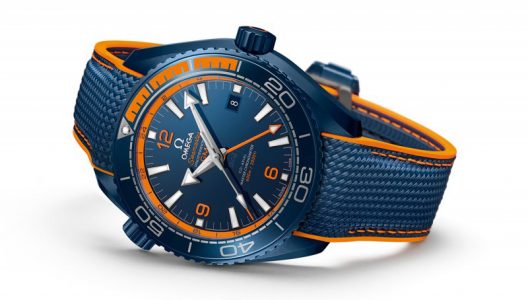 There are two 18k white gold broad arrow hands for the hours and minutes, a pointed seconds hand with an orange tip, and a long orange arrow hand for the GMT function (which you read with the 24-hour scale on the rehaut. Just below the center posts for the hands you can see the chemical symbol for zirconium dioxide, the type of ceramic from which the dial and case are constructed, but in a tonal color so it doesn’t stand out too much. Likewise, the date window is blue and matches the dial quite closely so it’s not loud. The bezel is actually made of three materials – ceramic, liquid metal, and rubber for the main insert, numerals and markings, and orange track, respectively. The crown is positioned at three o’clock, while at 10 o’clock there is a helium escape valve. Inside the watch beats Omega’s Master Chronometer Calibre 8906, which features a 60-hour-long power reserve and a silicon balance spring. It is tested and certified by both METAS and COSC. This means that it is an accurate and reliable timekeeper and that it is also highly resistant to magnetic fields – up to 15,000 gauss, in fact. The movement is handsomely finished and can be admired through the display case back. The watch comes on a blue rubber strap with orange stitching and a blue ceramic folding clasp that matches the case. Priced at $11,700, it is expected to land in retailers by the late third or early fourth quarter of this year. 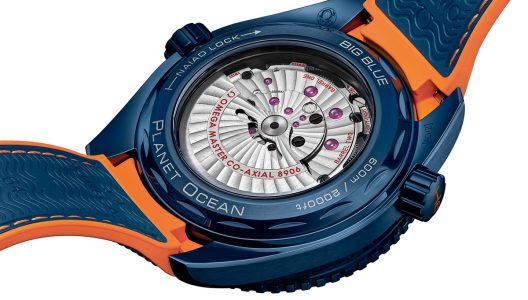