Boxing legends, friends and fans of famous boxer Muhammad Ali, gathered yesterday in London to attend the launch of the new TAG Heuer Carrera Muhammad Ali watch. The special guest of the evening was Larry Holmes as well as TAG Heuer Ambassador David Guetta and the singer Geri Halliwel, who with their presence increased the event in the professional gym Marylebone. Holms, as one of only five who have ever defeated Ali in the ring, was his sparring coach, and with his presence this evening added a bit of antique glamor, reviving the story of a man who inspired and inspires athletes around the world.

TAG Heuer Carrera Muhammad Ali special edition is in fact the re-release of the first collection dedicated to the celebrity athlete, launched in 2016 by the TAG Heuer brand. It was inspired by the Ring Master Stopwatch which was introduced to the world in 1957, and now it is in the TAG Heuer Museum. The Ring Master contained 7 rings, each with another scale including one boxer. Carrera Muhamed Ali has a 43 mm stainless steel housing with two crowns – one at a 3-hour position for adjusting the time, and another at a 10-hour position that rotates the inside mask. On the back of the case, the figure of Muhammad Ali is engraved with his signature. There are two colors on the dial – a red that traditionally refers to boxing heavyweights – 15 rounds of 3 minutes and cream-colored markers referring to amateur boxing in which round lasts 2 minutes. And red as well as cream markers, have a minute break, colored in black. 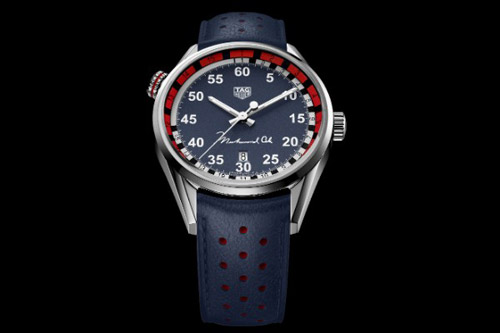 The watch is available with a leather belt in black or blue or with a steel bracelet in a combination of blue opaline dials. The commemorative TAG Heuer Carrera Muhammed Ali Limited Edition watch and replica watches of boxing gloves with the personal signature of Muhammad Ali 20 years ago, were sold at the auction the same evening, and all the proceeds from the sale go to The Muhammad Ali Center in Luivil, Kentucky. 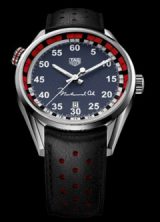 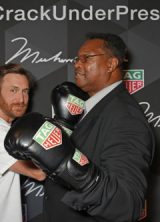 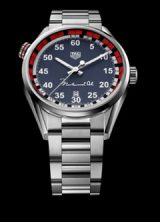