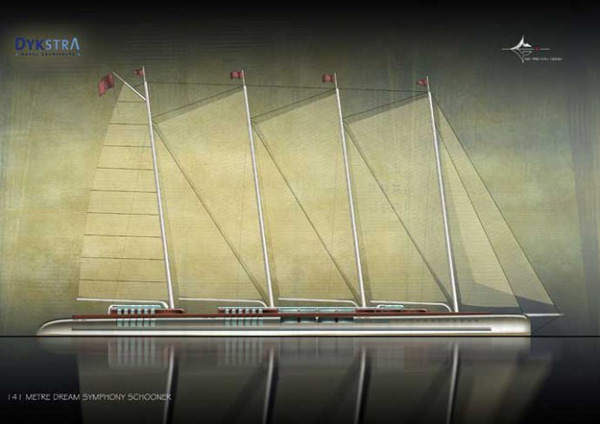 Sailing Yacht Dream Symphony After taking part in the 2010 Monaco Yacht Show, Dream Ship Victory shipyard signed a contract to build 141m Dream Symphony Yacht, the largest private sailing yacht ever. On September 23rd Dream Ship Victory signed a contract with Dykstra & Partners for the Naval Architecture and Ken Freivokh Design for the design and styling of Dream Symphony. Not only she the world’s largest sailing yacht to be built, the best part is that she’s all wooden too. Dream Ship Victory, with the same naval architecture and design team, already have considerable experience in large scale all wood yachts and the three yachts currently in build total 162 metres. Sailing Schooner Dream Symphony will be classical with a twist. The designers at Ken Freivokh like to mix classical in a very contemporary way, even on the exterior. They have picked up elements, such as glass barrel vault, which can found on the classic Coronet and extended the look of the yacht. The construction of the Sailing Yacht Dream Symphony will start in 2011 at the Dream Ship Victory yard in Turkey.
If you like you can check latest Other Stuff photos