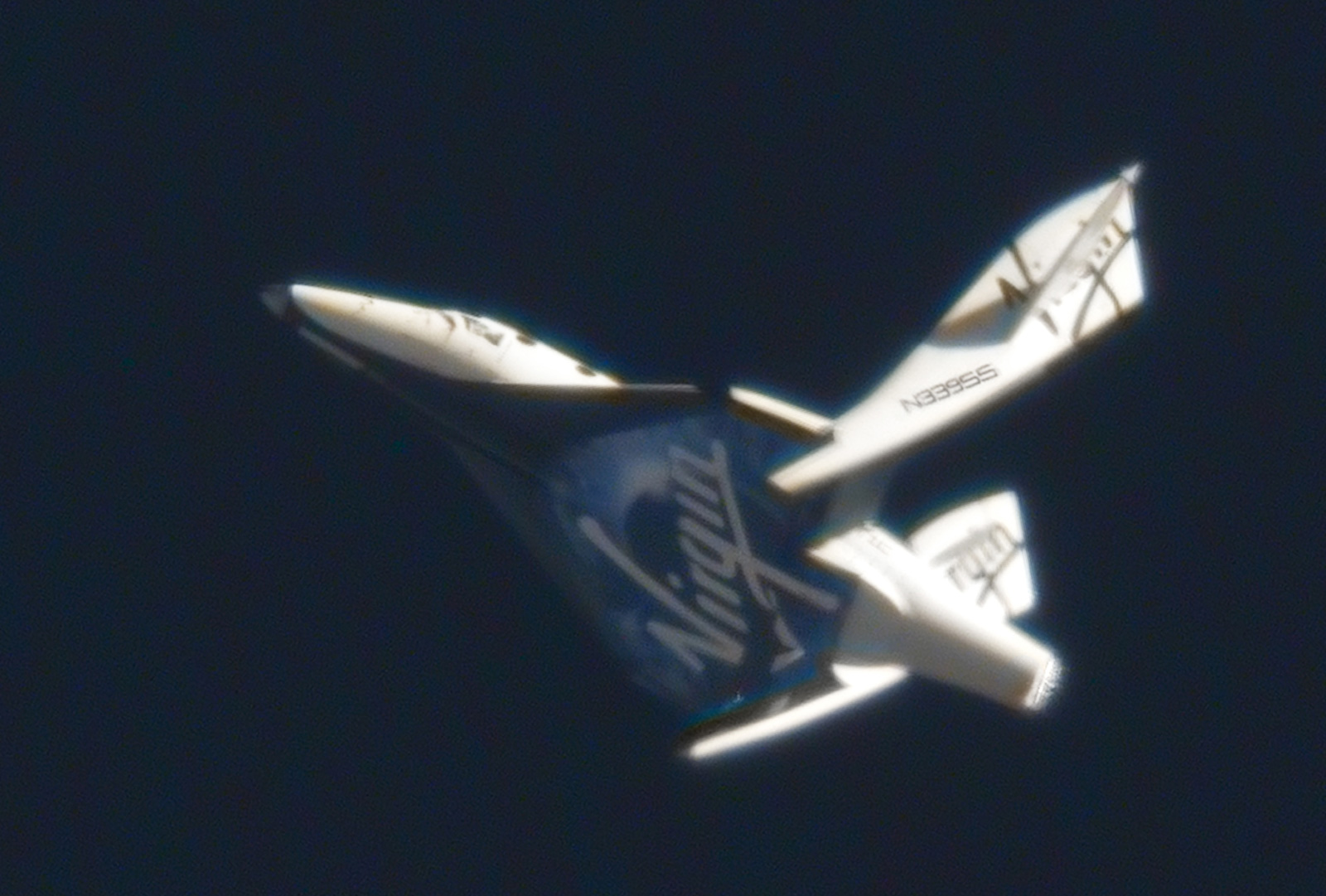 SpaceShipTwo’s First Feathered Flight The world’s first commercial spaceship, Virgin Galactic’s SpaceShip Two demonstrated its unique reentry feather configuration for the first time. The test flight took place early on Wednesday 4th May 2011, on the desert runway at Mojave Air and Space Port, about 100 miles northeast of Los Angeles. During a 45-minute flight, Virgin’s WhiteKnightTwo mothership brought the rocket plane up to an altitude of 51,500 feet, then released it for the glide. Two Scaled Composites test pilots, Pete Siebold and Clint Nichols,were at SpaceShipTwo’s controls. After attaining a stable glide attitude two pilots activated the feathering mechanism to rotate the tail section up to a 65-deg. angle relative to the fuselage. The aircraft maintained a level pitch while descending almost vertically at around 15,500 ft. per minute for 1 min. and 15 sec. At around 33,500 feet the pilots reconfigured the spaceship to its normal glide mode and executed a smooth runway touch down, approximately 11 minutes and 5 seconds after its release from VMS Eve. SpaceShipTwo fell to Earth more like a badminton shuttlecock than a speeding bullet. George Whitesides, Virgin Galactic’s chief executive, said in a statement that the test flight was SpaceShipTwo’s third in 12 days, reinforcing the fast turnaround and frequent flight-rate potential of Virgin Galactic’s new vehicles. We have also shown this morning that the unique feathering reentry mechanism, probably the single most important safety innovation within the whole system, works perfectly, he said. Pete Siebold,one of the pilots added: In all test flight programs, after the training, planning and rehearsing, there comes the moment when you have to go up there and fly it for real. This morning’s flight was a test pilot’s dream. The spaceship is a joy to fly and the feathered descent portion added a new, unusual but wonderful dynamic to the ride. The fact that it all went to plan, that there were no surprises and that we brought VSS Enterprise back to Mojave safe and sound is a great testament to the whole team. Virgin Galactic, founded by Branson, hopes to make its first passenger flight sometime next year from the yet-to-be-finished Spaceport America in New Mexico. The company said it has taken about 410 reservations for a ride. The price for the experience: $200,000.
If you like you can check latest Other Stuff photos