It is a Scream that has created an uproar in the world of art auctions and has become the most expensive painting.

The only privately owned version of Edvard Munch’s The Scream set a world record Wednesday when it sold for $119.9 million at Sotheby’s in New York. The 1895 pastel which features a haunted figure in front of a red backdrop, surpassed estimates to become the most expensive work of art to be sold at auction following the sale in New York. A group of at least eight bidders jumped into the competition, but it was a prolonged battle between two highly-determined phone bidders that carried the final selling price to its historic level, after more than 12 minutes.

The previous record for the most expensive work of art sold at auction had been held by Picasso’s Nude, Green Leaves And Bust which went for $106.5m (£65.6m) at Christie’s two years ago. The name of the buyer has never been confirmed but it is rumoured that Russian billionaire Roman Abramovich was the buyer.

Originally known as the Der Schrei der Nature (The Scream of Nature), which is one of the most recognisable images in the world, had been expected to fetch at least $80 million at the Impressionist and Modern Art Evening Sale at Sotheby’s. It was sold by Norwegian Petter Olsen, whose father was a friend and supporter of the artist. He plans to establish a new museum in Norway. The image has become part of pop culture, used by everyone from Warhol to Hollywood to cartoons to teacups and T-shirts, said Michael Frahm of the London-based art advisory service firm Frahm Ltd. Together with the Mona Lisa, it’s the most famous and recognized image in art history. Pablo Picasso’s Dora Maar titled Femme assise dans un fauteuil, achieved $29,202,500 and was the second-highest price in the sale. A superb offering of Surrealist works in the evening sale was led by Salvador Dalí’s Printemps nécrophilique from 1936, which has not appeared on the market in nearly 15 years. The work achieved $16,322,500. The Impressionist & Modern Art Evening Sale totaled $330,568,500, slightly exceeded the expectations of the auction house’s estimate of $323 million. A total of nine works have ever sold for $80 million or more at auction, according to Sotheby’s. Besides The Scream and Picasso’s Nude, Green Leaves, and Bust, only two other works have sold for more than $100 million at auction. Those are Picasso’s Boy With a Pipe (The Young Apprentice) for $104.1 million in 2004 and Alberto Giacometti’s Walking Man I for $104.3 million in 2010.

The Scream by Edvard Munch 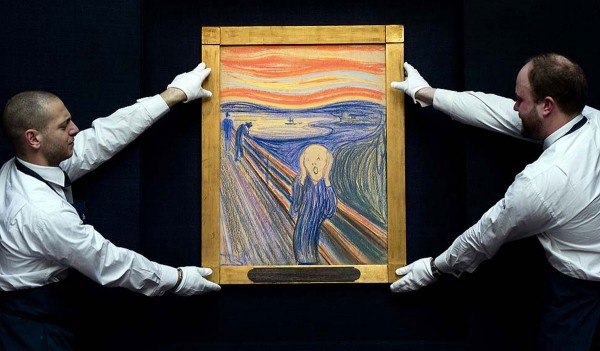