Custom home theater, inspired by some movies or series aren’t news. Earlier, we have seen Jacob Yarmuth’s Stargate Atlantis home theater, worth $70,000 and one more expensive, $2.5 million Pirates of the Caribbean Home Theater, built by Elite Home Theater Seating. This time, the same company has been commissioned to built a $2 million “Dark Knight” themed custom home theater for a private residence in Greenwich, Connecticut. 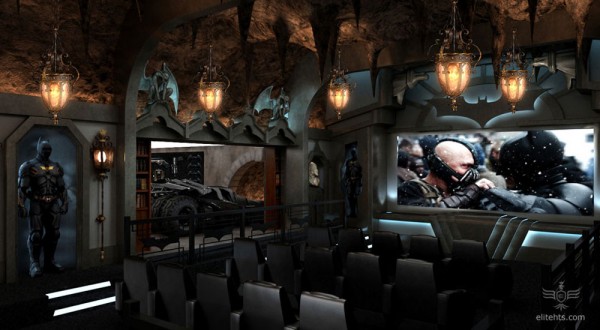 On the 12,000 square foot private Greenwich home has been done up to the detail with Grandfather clock and William Shakespeare stacked bookshelves, to transform it to remind you of the Wayne Manor. To enter in this room, one must enter a secret elevator situated behind a grandfather clock. You need to scan your fingerprint for access inside the elevator, which sports a glowing Bat symbol at the base of the button panel. The Dark Knight batcave is equipped with a 180′ screen, with two life-size batsuits on each side of the screen. With a total of six Batsuits placed throughout the room, the custom home theater almost resembles a secret underground, medieval armoury. The home theater seats are race car inspired and could easily fit the theme of the Batmobile. There is a secret book, hidden on the bookshelf, which must be pulled in order to reveal the 15 feet long and 19 feet wide size replica of the Batmobile. At the far end of the theater is a large gas fireplace with Batcomputer stations on either side, reminding you of all the bad guys Batman had to fightfor glory. Elite HTS’s CEO, Bobby Bala, explains where the idea came from to design this room. “The Dark Knight themed custom home theater was actually a design concept we did free of charge for one of our previous clients, mainly just for fun. Personally, I’m a huge Batman fan and with a background in CG animation, we were able to finish up the design within a couple weeks. Before starting, I told this particular client we’d do the design as long as he promised to buy the home theater seating from us, which he did”. Elite Home Theater Seating’s scheduled completion of the multi-month custom batcave home theater project is November 2012. 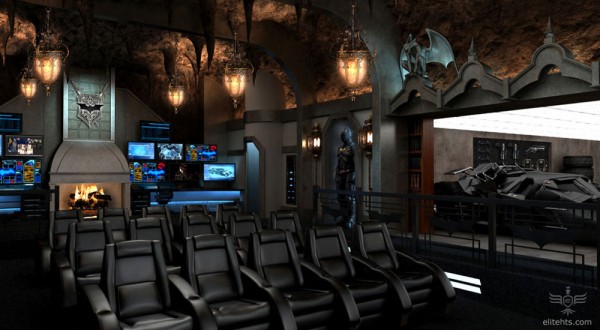