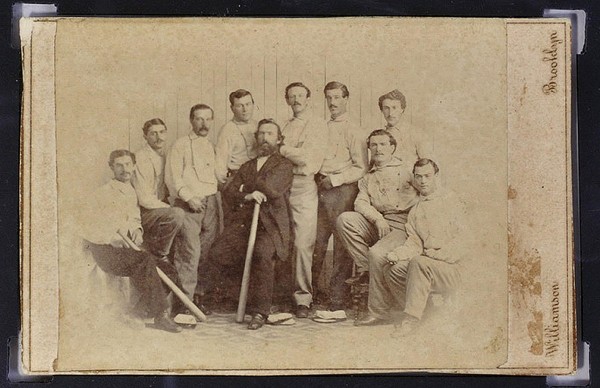 Every time when hear that some item which was considered to be worthless, actually achieve incredible price at an auction, I wonder why this doesn’t happen to me! Forgotten things in the attics, basements, which were lying there for decades, accidentally discovered – really drove me crazy, and now this… items purchased for ridiculous money being sold for big bucks at an auction. That happened with a rare 148-year-old baseball card found at rural Maine yard sale, which was sold at auction for $92,000 on Wednesday. The card from 1865 depicting the Brooklyn Atlantics amateur baseball club was sold by Saco River Auction Co. in Biddeford, who hoped the card would fetch as much as $500,000. A Maine man who doesn’t want to be publicly identified found the card inside an old photo album he bought while antique picking in the small town of Baileyville on the Canadian border. The man bought the photo album, old Coca-Cola bottles and a couple of oak chairs together in a single purchase for less than $100. The card isn’t the same as a modern-day baseball card, which became common in the 1880s. This card shows nine members of the Brooklyn Atlantics, known as the first champions of baseball, and their coach. The team was a founding club of the National Association of Base Ball Players, a forerunner of today’s National League Tom Bartsch, editor of Sports Collectors Digest, said $92,000 is a good price for a pre-war card without a Hall of Famer’s picture. “There are very few artifacts around from the 1860s,” he said. “Baseball was near its infancy in that time.” The winning bid was placed by Newburyport, Mass., native Jason LeBlanc, who purchased the card as an investment for his 4-year-old son, who has medical issues, according to the Portland Press Herald.