The Edrington Group has launched its latest limited edition bottling of The Macallan and has been released to commemorate the 60 anniversary of Queen Elizabeth’s coronation. The Macallan has already launches on the market limited editions in honor of the Royal Family like the Royal Marriage to celebrate Prince William and Kate Middleton’s wedding in April 2011, of which there were just 1,000 bottles at $230 each and Diamond Jubilee bottling in June 2012, of which only 2012 bottles were available at $530 each. 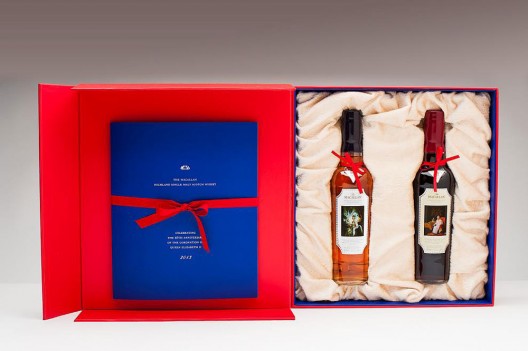 Now they complete The Macallan’s trio of commemorative royal bottlings with commemorate the 60 anniversary of Queen Elizabeth’s coronation. Limited edition Macallan Coronation Bottling comes in Gold, Windsor Red and Blue box inspired by the Queen’s coat of arms features two 350ml bottles of The Macallan single malt. The first is a citrus led whisky aged in American oak casks and decorated with an image of the Queen taken in 1953 by royal photographer Cecil Beaton. The second bottle has been aged in Spanish sherry casks, giving the liquid a flavour of ginger, nutmeg and rich fruits. It has been decorated with an image of the Queen taken in 2004 by portrait photographer Julian Calder. The pack was designed by art director David Holmes. Ken Grier, director of malts at Edrington, said: “We are proud of the whiskies we have created for this special bottling. They both portray the character and nobility of the Queen at two very different stages of her life and we hope that people will enjoy the story they have to tell.” The bottlings are available in limited quantities of just 1953 pieces with price of $530.