Graham continues to explore its origins. Back to George Graham, the peer watch maker, the father of the chronograph, the genius craftsman who left his mark on an entire generation of scientists and intellectuals, and an inspiration for today’s timepieces. Following in the footsteps of late 17th century watch making, Graham has introduced a tribute classical Geo.Graham Tourbillon which distinguishes itself by its extreme thinness and micro-rotor movement. 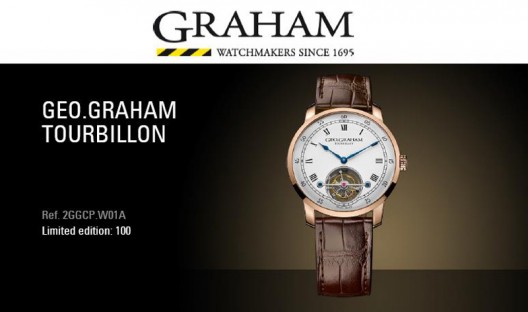 Graham was determined to preserve the long-standing tradition of high precision English timepieces from the Age of Enlightment even though the tourbillon hadn’t yet been. An ultra – thin (9.85 mm) watch with 60 seconds tourbillon was created incorporating high-technology and expert craftsmen, such as local partner Le Cercle des Horlogers in La Chaux-deFonds, has contributed to achieving the classical Geo.Graham Tourbillon. The double – bridge construction of the 60 – second tourbillon, at 6 o’clock, combined with the micro – rotor movement provide the perfect functional balance with an increased power output and barrel resetting as well as enabling to reduce thickness. Made in pink gold (18K), the Geo.Graham Tourbillon features remarkable elements such as the balance wheel and off-center oscillating weight which together create a dynamic effect and perfect unity of technology and design. The attractive and mechanically completed movement is held by two sapphire glass boxes on the front and back of the piece, giving the impression it is floating in the air. The domed crystal offers a full size dimension (36 mm opening) and a see-through view on the beauty of the mechanism. The off-centred oscillating weight functions flawlessly as a special slot on the case back glass box has been created on the sapphire crystal case back for it. The white enamel lacquered dial features railway track styled minute scale and Roman numeral hour markers. The oscillating weight is engraved with ornamental arabesques also inspired by traditional George Graham decoration. 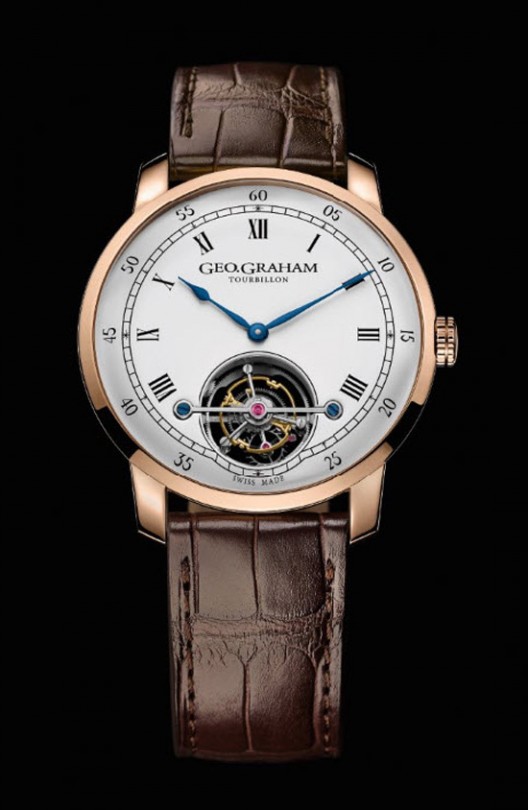