In total, only 80 copies of this model have been produced and one will look for the new owner at auction in London in the first half of September. An extraordinarily rare example of Mercedes CLK DTM AMG Cabriolet will be auctioned in London next month. This is a special version of the AMG model that was produced to celebrate the excellent results of the Mercedes in the DTM championship. Besides a 5.4 liter V8 engine with a supercharger that develops 582hp (more than the current C63 AMG S), this model has received a number of visual enhancements that stand out from the classic AMG version. Among them stand out wider bodywork, larger air vents, new wheels and a carbon fiber spoiler on the rear. Mercedes initially decided to produce 100 copies that were expressly sold, so the German manufacturer decided to place an additional 80 copies on the market, this time in a non-decked edition. Just one of these copies is a model on images that will soon be looking for a new customer. With the rear-wheel drive and the 5G-Tronic automatic transmission, this beast hits up to a hundred miles under 4 seconds while the maximum speed is over 320 km/h. Given that this is a 10-year-old model, these numbers are quite impressive, and that’s what Formula 1 drivers have recognized. Namely, this special version was once driven by Jenson Button, Mika Hakkinen, Juan Pablo Montoya and Kimi Raikkonen. From the auction house RM Sotheby’s, which is in charge of the sale, it is noted that this copy has less than 19 thousand kilometers, and it is equipped with rich equipment that emphasizes xenon lights, navigation and Bose music system. The price has not been announced, but we are confident that the potential buyer will have to splash out a huge amount to be find behind its steering wheel. 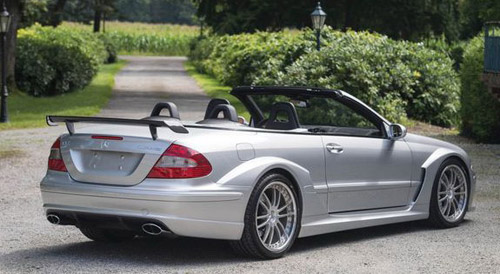