Magic Lotus Automaton model paints a water version of Eden…
All clocks display time. Several of them have astronomical details and other elements of horological esotericism. But only one, as far as we know, has a four-minute circular animation that paints a garden resembling a paradise garden, with a lotus flower and playful koi fish.
Introducing the new Magic Lotus Automaton wristwatch by the Swiss brand Jaquet Droz, who are specialists, as they call it, in the field of the “art of mechanical fascination”. 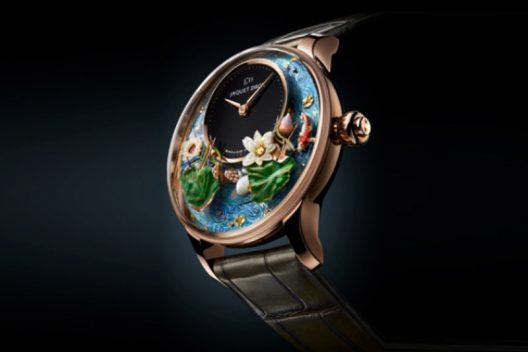 Introduced this May, the amazing watch has spent three years in production and development, which is easy to understand as soon as you see the graceful poetry on your sophisticated dial.
The scene depicts four flowers, each representing one season. At the 3 o’clock position, there is a hand-carved mother-of-pearl button symbolizing the unopened lotus bud, that is, spring. To its left is a flowering lotus, with yellow sapphire and gold details, that evokes summer. The lotus flower that has fallen into the water, which seems to carry it away, represents autumn, while the seed decorated with diamonds at the six o’clock position marks winter. 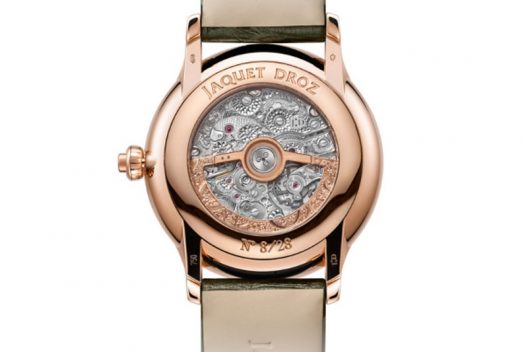 The dial of Magic Lotus Automaton model consists of three parts. The first one is made of onyx, and is created with gold pointers. Around it, there is a fixed crescent-shaped disk where a cycle of lotus blossoms takes place, with all the twigs and three lotus petals housed in enamel on the back made of 18k white or red gold.
The fully rotating third peripheral disc features two animations: one involves a handmade gold koi fish that tails with its tail as if it really runs through water, and moves up and down, gently diving beneath the lotus flower, while the other is presented as a floating lotus that receives a new one central stone, blue or yellow sapphire or ruby, each time it passes below the dial or leaf. 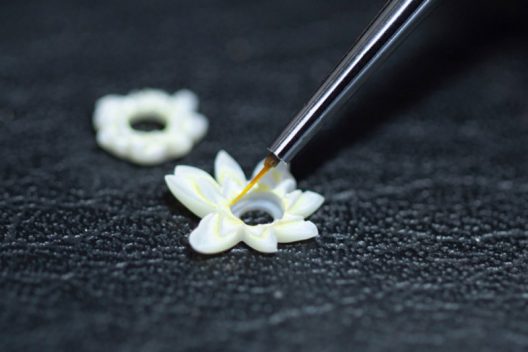 The delicate, hand-painted blue-green fairy cavalry is positioned between eight and nine o’clock as a reserve of energy while marking the progress of this long animation. When the energy reserve is empty, the fairy cavalry rests on the lotus leaf.
Jaquet Droz has been able to create this kind of mechanical art with the help of hand-fanning mechanical automation, with the help of a mechanism that at the push of a button animates the lake, koi fish and lotus flower, with over five hundred components. The second, self-winding mechanism triggers the display of hours and minutes.
Available in a 43mm diameter case made of white or red gold, this model is limited to just 28 pieces in each color, costing $210,000 apiece. 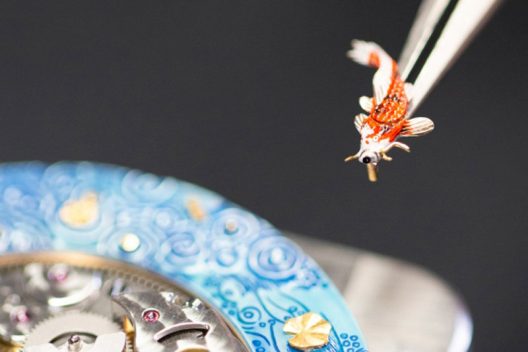